It’s official.  Fabian is now the recipient of genetically-modified T cells (lymphocytes) in this cutting-edge clinical trial that we believe will cure him of leukaemia.  But what an anti-climax!  On T Day itself he first underwent a standard bone marrow aspirate to determine his pre-treatment level (we still await results).  Then the cells arrived amid a flurry of activity with nurses and doctors all checking and double-checking that Fabian was indeed Fabian and they that they had in fact got the right test tubes.  Just prior to this, our consultant, a rather eminent professor of haemotology, had given Fabian a final check over and pronounced him ‘looking better than I have ever seen him’.  He then wished us luck and I thanked him, unable to hold back a brief upsurge of emotion in my gratitude for his ground-breaking work.  There was just 5ml of modified cells – 52 million of them to be precise.  How could that seemingly small amount of innocuous fluid be a life-saver for our son?  They had actually hoped to generate more but Cassia’s original blood donation had not produced sufficient T cells.  This ought not to matter as once inside Fabian they will multiply rapidly.  The infusion itself was a few short minutes, all captured on film by the ITV crew who were clearly not going to miss the moment.   Fabian is a reluctant star, unaware of his starring role in being one of the first children to undergo immunotherapy.  You will no doubt enjoy his understated performance when the film is finally aired.

After it was over we were given the empty vials as mementos and calmed down with a cup of tea (the ultimate medication).   Fabian though was subject to round the clock observation in case of unexpected side effects.  The similar trial in the U.S. had caused a number of patients to require ICU following their infused cells but much has been learnt from that experience.  Nevertheless, doctors were cautious but yet there was no adverse reaction and just 24 hours later Lydia was able to take him outside to play on the swings!  He continues to do well and should be discharged early next week.   Monthly BMAs will be used to determine the return or not of the disease so we will have a rather nervous wait for results each time.  Cancer sufferers will recognise this wait and see existence as the so-called ‘sword of Damocles’.  But our hope is in the Lord and in Him we trust (constant note to self).  Thanks to all of you for standing with us! 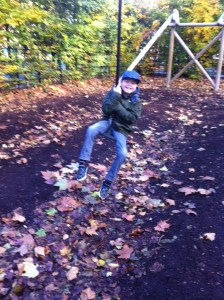 One Response to T Cells R Us