The Book of Ecclesiastes speaks of the different times and seasons in our lives and declares, ‘He has made all things beautiful in its time’ Ecc 3:11.   This is an encouragement, even though events seem far from beautiful right now.   At the time of my last entry we had hoped the rising MRD disease level would stabilise, not least because MRD research tells us there was a 28% statistical chance of that happening.   The trouble with stats is that that is all they are.  So when we learnt that last weeks bone marrow aspirate has confirmed a further tenfold rise in leukaemic levels, we’re reminded that hope is not measured in percentages.   At the same time as that operation, we found Fabian had developed a suspicious lump.   Doctors immediately scanned this by ultrasound as it was felt this was due to a localised relapse, even though he has not quite reached ‘frank relapse’ in his marrow.  Since leukaemia is systemic, rather than metastatic, it doesn’t matter where the disease shows up, it will end up everywhere.  We therefore have to accept this state of affairs and proceed as best we can in continued faith and further treatment.   The immediate need is to establish the cause of the lump, so Fabian will have a biopsy performed on it as soon as practicable, together with a lumbar puncture to check the spinal fluid for disease and an intrathecal chemo injection into the CNS for good measure.  If the biopsy confirms it is leukaemic, they will use radiotherapy targeted at the area.   This could mean daily hospital trips for two weeks.   We’ve also agreed a plan to start him on maintenance level chemotherapy so as to slow the marrow disease growth long enough until the modified T cells are ready.   Cassia gave her blood for these last week – indeed more than twice the anticipated amount so that nothing is left to chance in terms of generating sufficient cells.  She is truly a saviour sister to donate more life-giving blood to her brother and remains most humble, not seeking any attention because of this for herself.   We returned to the Marsden to reacquaint ourselves with our original consultant who will now oversee Fabian’s treatment up until the T cells are ready sometime in May.   Many memories flooded back.  Fabian is an old warhorse to the staff there though it is a strange irony to be greeted with the welcome ‘nice to see you back, Fabian’.

Returning to my times and seasons theme, I believe this is a time to pray and not give up.   The parable of the persistent widow tells us ‘that at all times we should pray and not to lose heart’ Luke 18:1.  We are so grateful for those of you that do.   Following the mysterious pastor episode (see previous entry), I also received  prayer on behalf of Fabian from Dr Randy Clark, renown for his healing ministry and one- time minister during the Toronto outpouring.   God is no respecter of persons – even the dogs eat the crumbs from the table (Matt 7:28).   Fabian himself remains sanguine, despite all.   He has hopes and dreams to fulfil , so Lego Master Builders, watch out! 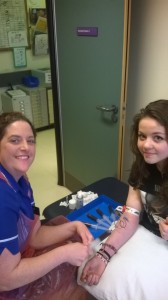 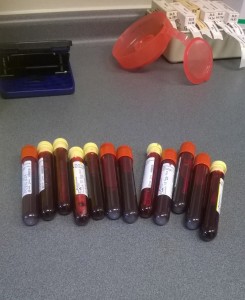