Down but not out

Regular followers will note I have been offline for the entire duration of the World Cup.  This is pure coincidence, I assure you, as had there been news to tell that would have been my first priority (the fact that the tournament was totally absorbing probably distracted me nonetheless).

I know many of you will have been keeping those T for tank cells in your prayers and it has been a constant burden on our minds as we awaited the BMA that would give us the first results.  From a symptom point of view, Fabian has been perfectly fine with no indication of the immune battle taking place within, which ironically was what we wanted to see.  For instance, the EBV vaccine that was injected ought to have caused a rash to show the fightback – but there was nothing.  No sign either of any ‘cytokine storm’ that has been the hallmark in the U.S. trials.  Just regular trips to our local for platelet and Hb infusions (but by no means minor inconveniences!).  But now he has had the BMA together with more vaccine and the result we received was totally deflating – there had been no reduction of leukaemia but in fact a near doubling of the MRD level, though it’s still well below frank relapse.  The principal consultant is on annual leave so we have yet to unpack the why’s and wherefore’s of this unexpected outcome but my guess is that it will provide little solace as the headline figure suggests that the treatment has possibly failed because at the same point first time around there had been a measurable disease reduction.   This is disappointing for all future beneficiaries too, as a breakthrough in this type of immunotherapy seems still to elude doctors.

We are certainly down but by no means out.  Where man’s works end, God’s begin!  In fact, the night following the result, a healing evangelist was coincidentally holding a meeting in our neighbourhood to which we took Fabian.  He nonchalantly sauntered up to receive prayer and returned declaring himself healed and saying ‘ we can go home now’.  This is the simple faith of a child that Jesus spoke of – unlike his anxious parents wondering will He heal or won’t He?   We hope to make time for special trips over the course of the summer, for instance we all enjoyed a day at Alton Towers courtesy of Rays of Sunshine.  I’m proud to say the girls and I rode the infamous ‘Smiler’ and memories of our trip to Disneyland came flooding back – literally – when all got soaked on the flume ride.  Fabian’s new raised garden has exploded with life with the sunshine and rain and he loves tending it.  It’s a well-known cliche′, but each day is a gift. 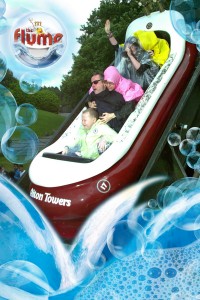