I’ve learnt not to assume when I wake up that I have any idea or control over what unexpected event might happen that day.  In other words, to take nothing for granted.  Because when I went to work as normal last week, I had no idea that by the end of the day I would be holding my son as doctors fought to save his life.

So what happened? Fabian had returned home a few days before following another spell in hospital that resulted in having to remove his hickman line which had become infected.  For the first time in years he now required cannulas and blood tests using needles; not pleasant when he had been used to plug’n play intravenous lines.   He seemed well enough that morning but later spiked a temperature and was duly readmitted for another cycle of antibiotics.  Nothing unusual in that, except as they infused the first dose, Fabian went into septic shock and this sent his vital signs into orbit.  In just a few minutes, his heart rate hit 240, temperature reached 40.1 and there was no discernible blood pressure.  Coupled with this came a powerful attack of rigors – convulsive shaking as the body attempts to raise its temperature.  Doctors injected him with a series of water boluses in an attempt to resusitate his BP but with limited success.  He was put into the dependency unit, a sort of ICU-lite and hooked up to oxygen and a cluster of monitoring lines.  As the night wore on, his BP dropped further and on repeated occasions, doctors took us aside to decide whether they should transfer Fabian across to St George’s ICU.  It was clear they felt they had reached their own limits and that he would otherwise succumb within a few hours if not moved.  The ICU option itself was high risk as he might not have tolerated the powerful drugs they use, not to mention the journey across London.  Well, we agonised over this but ultimately decided he should remain put, believing that the many prayers being said around the world would carry him through.  One deep concern was that our eldest daughter, Oli, was 300 miles away at Uni, so we had to make a difficult call and ask her to catch the first available train back and she willingly did so, much to Fabian’s delight.  The rest of the night seemed interminable.  We dozed next to him, keeping a half-closed eye on the monitors for signs of his BP stabilising.  I can’t recall the exact time when I heard the nurse say; ‘It’s risen slightly’, but from that moment we knew he had turned the corner and with that came a huge sense of peace.  Fast forward to morning, and Fabian was sitting up asking for breakfast!  The doctors and nurses all took turns to pop in and were genuinely shocked but delighted at his rapid recovery.  Oli then turned up and might have wondered what the fuss had been about.  However, a further setback later that day was that his gastrostomy wound opened up and rather dramatically, poured forth a large amount of bile and blood .  The sight of it was very distressing and Fabian was in agony.  Although properly dressed now, it remains a real concern and he’s unable to eat or drink normally until the wound closes up.  The original infection is a lot more stubborn and of course, underlying the immediate issues is the disease itself which continues to wipe out any healthy white cells he has.  Our plans for blinatumamab (excellent word for scrabble) are therefore on hold, perhaps for good?  We had previously made the day trip to Sheffield to discuss this drug option with the team there and felt on balance, it offered a worthwhile attempt at getting back into remission. The odds are low, but better than none.

A few days before this incident we heard sadly that yet another Marsden boy known to us had lost his fight.  But by God’s mercy, we still have our Fabian because He numbers our days, not because his days are numbered. 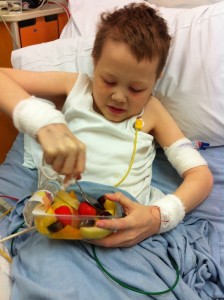 2 Responses to The longest night