Well, after all the hype, our T Day came and went in underwhelming fashion.  The build up to this, Fabian’s second round of immunotherapy, has seemed hugely drawn out so we did not approach today with the same alacrity as on the previous occasion.  It is also sobering to know that this was possibly the last treatment for leukaemia he will ever receive, though not a feeling shared by Fabian who would be elated.  The day began with a standard bone marrow aspirate that will provide a baseline level going into the therapy.   Fabian’s stock phrase just before ‘going under’ is “see you on the other side” which of course, has a rather different connotation to what he actually means!  He recovered well and the cells arrived shortly after lunch accompanied by a small army of nurses and doctors.  There was a fear that he might experience a cytokine reaction from the cells and that this would be life-threatening.  Since there is no identical precedent to this procedure, one could say the doctors were playing it uber-safe.  Vials of hydrocortisone and adrenalin were to hand if a reaction had occurred – the use of which would have rendered the T cells useless and that would be that.  Thankfully, this was not the case and within minutes of the infusion Fabian was back to his lego build from which he had been so rudely interrupted by this procedure, cancer-curing though it may be.  There will be a further top up tomorrow and then we wait and see.  The EBV virus was administered earlier in the week and it is this that should activate the T cells to multiply and continue to regenerate.  To help Fabian understand the process, he’s called them his tank cells which he visualises going through his blood blasting the bad cells to bits.  Cue battle of Kursk war clips and the analogy is complete, except that unlike those panzers, let’s hope his tank cells won’t run out of gas.

I’ll end this entry with another T; thanks.  Thanks to our medical team who have given us this unexpected possibility and thank you to God for making possible the unexpected.  Here is positive Fabian giving you all the thumbs up! 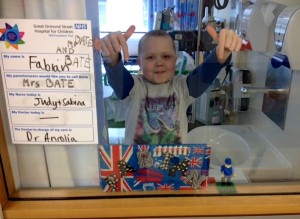 7 Responses to Tanks and thanks