Time for a polite rant – this disease sucks. Whatever we have thrown at it, the thing reinvents itself and comes back stronger. Medically, they call it clonal evolution so whereas in the early days the leukaemia had ‘one cancerous head’ there are now many, a bit like the Hydra of Greek myth. I was reading Fabian’s most recent haematology report and it runs to 15 pages of lab analysis! And this is a fraction of what a complete genome sequence would generate. We are indeed ‘fearfully and wonderfully made’.
Well, the latest news is that Fabian came down last week with a serious infection that turned out to be an eColi. His blood counts are shot to pieces just now because of disease and chemo, hence his susceptibility to this commonly found bacterium. It has taken a while to stabilise him with antibiotics but he’s slowly winning the fight and the doctors acknowledge he is one tough cookie. Of course, being an in patient is so miserable for him and he has been rather down at times. My usual attempts to elicit a smile (like wearing a bedpan on my head) have lost their lustre but if his temperature holds steady we may get a few hours home leave this weekend.
So having now reached the limit of what conventional treatment can do, we have been looking into taking an integrative approach and possibly combining or replacing chemo with alternative therapies. There is no shortage of material on the Net in this regard, much of which has to be run through the ‘quackwatch’ filter. That said, God has clearly put healing properties in many herbs and plants and these have been around long before allopathic medicine and the pharmaceuticals. Interestingly, one evidence-based agent is the highly toxic oleander plant, known as Anvirzel in drug form. We also like it because it bears the same name as our eldest! Equally, there are more biological therapies coming onstream which are antibody targeted treatments but probably no more effective than ‘good’ old chemo. We certainly would not put Fabian through any more hospitalisation without far greater certainty of a good outcome.
During the sunny days we managed to fit in some enjoyable events including CarFest, Lego Show, BBC Good Food Show and a helicopter flight. Fabian’s vegetable garden abounds and he has produced what must be the the largest courgette I have ever seen. The chickens and rabbits bore offspring and our apple tree has gone bananas (with apples).
I am not going to say anything other than that we are in a difficult place, but never alone. His rod and staff, they comfort us (Ps 23) and His promises are yes and amen. 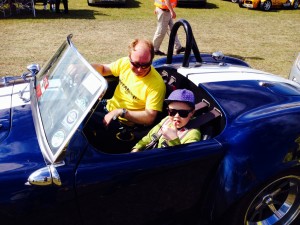 2 Responses to This sucks!