Infections, decisions and our big G

Torrid times for Fabian as he succumbs to more infections resulting in three hospital admissions in the past two weeks. This is a predictable outcome of him having close to zero white cells and completely zero neutrophils. Without this natural protection every bug or virus is a potential killer. These usually present with an all too familiar spike in temperature and we have to grab the overnight bag and head to our local (hospital, not bar). We had a serious scare when during one night Fabian’s heart rate dropped below 40 and his BP shot up. Thankfully, it stabilised over time but doctors were left scratching their heads as to what the cause was despite a raft of diagnostics such as ECG, X ray and CT scan. Most infections are linked to his intravenous lines and PEG (gastric tube). These are particularly hard to shift, and being in constant use for meds mean one simply exacerbates the problem. The local hospital is generally very good but they don’t deal with enough oncology related illnesses to anticipate the sort of complications Fabian presents. Our own knowledge of what to do is often key to making the right intervention but we were completely caught out recently whilst enjoying a restaurant meal. Fabian had been to wash hands and returned with a large damp patch on his shirt. We assumed he had splashed himself but subsequently discovered that the PEG had loosened and his stomach was leaking. Having to patch him up urgently in front of the other diners no doubt spoilt their appetites!
In terms of treatment, we’ve agreed by necessity to stop oral chemo and tick over on vincristine and steroids until his counts recover. That will reduce risk of infection but won’t necessarily stem the spread of disease. It’s a case of the lesser of two evils but if his marrow can recover, we can start to use immune boosting supplements that are anti-cancer agents too. We are also in the ‘valley of decision’ about whether to apply for further experimental therapy. I’m referring here to blinatumamab, a monoclonal antibody that is achieving remission within two weeks for at least one third of ALL patients who are using this drug. The flip side to this is potentially life-threatening side effects that kick in if the drug is working! The key attraction, though, is that it’s a new and different weapon to wield against Fabian’s subversive leukaemia and therefore stands a better chance of succeeding than simply repeating chemo. We need to be sure, though, that this is in the family’s best interest. All of us are affected by the ongoing disruption and emotional rollercoaster but then any parent reading this knows we are hard-wired never to give up the fight for a child and I’m reminded of a certain president who famously said; ‘if we do nothing, we run the risk of failure’.

Fabian remains sanguine throughout these ordeals and his good humour and charming wit make him a firm favourite with the medical staff. We continue to fit in the odd day trip or special event, most recently the concourse de elegance collection of famous cars at Hampton Court and a corporate activity centre where we all donned cams and took part in a ‘battlefield live’ laser fight. September is UK childhood cancer awareness month and the many stories publicised highlight just how many ordinary families like ours are fighting the big C. Before this all happened, I would never have paused to think about it, but now we’re on the inside looking out it’s been a revelation.
Please keep sending your prayers for Fabian upward; there’s a big G fighting for him. 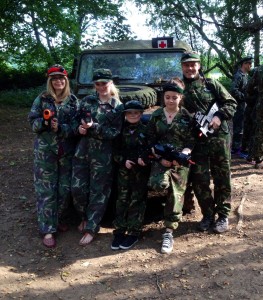 One Response to Infections, decisions and our big G