Returning to my blog on 11/11 brings mixed emotions. I recall so well the pain and sadness of charting our journey with Fabian in those last two years of his life, juxtaposed with times of relief and fun together. So now, on the 4th anniversary of his passing, I’m ready to return and update faithful followers with our time since.

There are many analogies used to describe grief and they all have their place. He’s one for example; grief is like a watch – something you wear unconsciously but occasionally check – it’s there all the time. We’ve certainly handled grief differently within the family.  There are no rights or wrongs, no better or worse. The children adapted quickly, trying to forget and move on in their lives as they pursue their individual career paths. But they hold an unstated anger within that life is unfair. I can’t disagree.  But as parents, the process is different for us. It’s hard to move on lest we feel his memory is forgotten. We’ve kept his room much as it was together with all his possessions. It is a sanctuary to sit there from time to time and let those items trigger sweet memories of happy times together.  Over the years, we’ve attended several bereavement groups and courses and often come away feeling surprised at how well we seem to be coping when compared to others. But then, of course, we have a hope that we will be reunited together in heaven.  What a hope! Lydia tends Fabian’s grave with unstinting devotion.  Dare I say it, there seems to be a competitive edge amongst the children’s graves as to whose is the most immaculate.  We deliberated an excessively long time over the nature of his headstone and inscription thereon. It had to be fitting and lasting.  Unlike an elderly relative, a young child’s grave is likely to be visited over a far greater period, as siblings will have many more years ahead of them to do this.  Fortunately, one of the many treats Fabian had been given was the opportunity to have a lifecast made at Elstree Studios and having this mould gave us the option to commission a bust of his head. We were anxious it needed to be sculpted sensitively and present a good resemblance as there would be no second chance if we weren’t happy with the result.  Well, any fears were simply blown away when it was unveiled to us.  The cast, in white marble, beautifully captures Fabian’s wistful smile and he looks peaceful.  It sits atop a rather dominant granite stone and will no doubt weather a century of outdoor exposure.  To commemorate its’ installation, we held an unveiling service at the grave to which many came and shared this time.  Two friends, both professional violinists, played and Fabian’s old headteacher gave a short message.  The sun shone beautifully as it did that day we buried him.

One obvious positive since 2014 has been the founding of a charity in Fabian’s memory.  Fabian’s Childhood Cancer Trust (www.fabianstrust.org.uk ) is ably run by Lydia with help from volunteers who support her in a range of fund-raising events.  The charity has been nominated charity of the year by several retailers and uses its funds to provide treat bags and breaks for parents of children with life-limiting conditions.  Funds are also used to support research into leukaemia treatment being undertaken at the Irving Laboratory for Cancer research in Newcastle.  Fund-raising is both demanding and time-consuming and we are always touched by the generosity of those who volunteer to support this work.

We’ve always monitored the progress of the ground-breaking CAR-T immunotherapy trial that Fabian pioneered, It has been heartening to read this treatment was subsequently approved by the FDA in the U.S. and just recently, becoming a first-line treatment for childhood leukaemia here in the UK.  Indeed, we found ourselves unwitting guests on the Victoria Derbyshire BBC1 programme to talk about our feelings when this was announced.  Bitter sweet, of course, as we wonder whether the newer version might have cured him as it is now doing for a much higher proportion of children.  The interview was conducted by Skype and we supposed it was on radio rather than TV so it was a shock to see ourselves on the screen watching later on catch-up!

So today, the nation remembers that momentous day 100 years ago of the Armistice and it is fitting that it should fall on the Sunday so that many can attend church services across the land. We will, of course, be wearing our green poppies, remembering both those who gave their lives and Fabian whose life was taken. 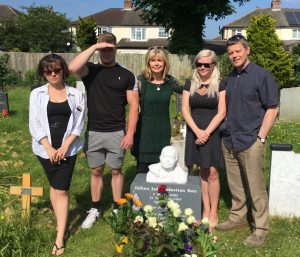